Meet your February Cool Collector. Each month, we chat to someone with a passion for collecting: vinyl, CDs, DVDs, blu-ray, dust… or any other type of physical media. We love what they’re about, and you will too. Be awestruck, be jealous or just be inspired with new ideas for your own cool collections. This month, we meet Kami: Self-professed semi-professional redneck lounger, writer, published author, record shop employee - which is the best job description we’ve ever heard! He was once hung up on by Derryn Hinch and insists he’s a random hoarder, rather than calculated collector. We beg to differ, Kami - you’re as cool as they come. The rest of you - check out why, below. 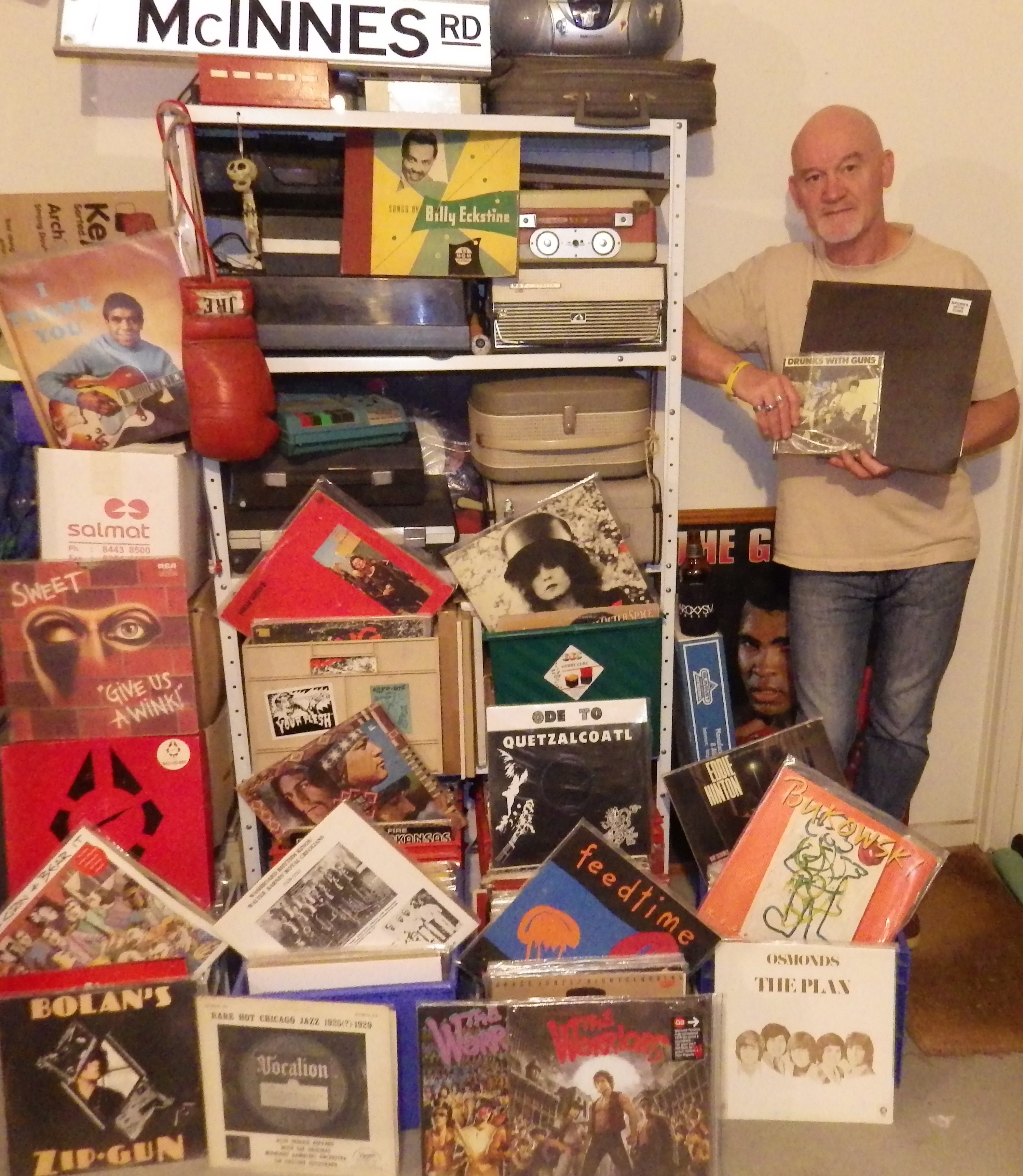 Tell us a bit about yourself.

SA country boy born and bred, moved to the ‘big smoke’ (if Adelaide can be called big) in my 20s after a stint in Darwin.

Married my way up to middle class with a very, very patient wife who puts up with a lot more than she should have to!

Owned and ran Factotum Books in the 90s which had a brief moment of notoriety when, on a slow news day, it was discovered I sold serial killer art.

In the 2000s, I wrote for men’s mags, went to the pub on Ralph magazine’s dime and was briefly ‘boxing expert’ at People magazine.

What do you collect and when did it start?

Let’s be brutally honest here - I’m a hoarder, more than a collector. Collectors work towards a theme, hoarders just go “wow, I like that, can I find more of them?” in a totally random sort of way.

That said, I do predominantly collect records (LPs and 45s) but there’s a cupboard of cassettes, there’s cds and then there’s a couple of crates of 78s. We won’t mention the boxes of 78s in the back shed. Then I also have a few old record players, radios, there’s half a dozen reel to reel machines and a tape recorder for the blind.Plus the usual dvds, vhs tapes (I did do a cull though), books plus a stack of boxing memorabilia. (I inherited my father’s boxing mags and books and have just steadily added to the shelves.)

And I’m a Bukowksi tragic so his books, movies, bootlegs, spoken word albums and bits and pieces take up another shelf or three. I do a zine about shitty b-grade movies too so my movie collection is taking up more and more space as well. Like I said, more a hoarder!

As a kid I started with comics (now long gone) but music was always number one. I was always surrounded by music. My parents loved to throw parties so records were always around. There were  LPs and 45s left behind so I was constantly listening to and playing records. I now have my parents’ radiogram in my shed, awaiting some love and care.

My earliest recollection of specifically asking for a record was Mark Lindsay’s Arizona 45. That came out in 1970 so from then on I guess. I got my first cassette player in December 74 so a loooong time (oh, and I still have the single!).

How would you describe your tastes?

The Sweet felt similar because it felt like ‘we’ discovered them'. It was us 12/13 year olds plunking our pocket money down for their singles - not our parents or elder siblings. They were ours.

Then punk came along and blew my mind. Especially living in a country town where that sort of thing definitely made you stand out. Discovering Richard Hell, The Dead Boys, Radio Birdman totally changed the world around me. That was the turning point, I think. I realised there was more out there and that you didn’t have to toe the line.

There was the noise stage as well. Experimental music etc, all that obscure wonderfully ugly stuff. As I got older and checked out my father’s collection I developed a love for jazz.

Now I find myself listening to more country, early acoustic blues and lots of 20s/30s Jazz. The compilations of early jazz recordings are my ‘jones’ now. I guess the same way people love the Nuggets collections, I love the old Herwin, biographical, historical recordings.

I will just say that I don’t own bugger all of the big four – Zep, Beatles, Stones or Floyd – in fact I have one beat up zep album, one Floyd album (never played), maybe two Beatles and maybe three or four Stones LPs - and I've never spent more than $2 on any of them.

For some reason I just don’t get excited about ‘em… probably because I grew up constantly hearing them so I just tuned out. When I see them at garage sales I leave them behind - much to the dismay of the ‘flippers’!

I have wide and varied taste but I can be an ornery sod as well. If I decide I don’t like it, that’s it. I don’t like Dylan or Cohen either, so I’m definitely a heathen!

What's your most prized Item/possession/collection of items?

Hard one to answer.

I don’t particularly go out of my way to buy ‘rare’ records or first pressing (though they are nice) – but I do have a couple of Feedtime test pressings, the first Drunks With Guns LP plus a couple of their early 45s, Band Of Light LP which apparently is worth a few bucks, a cupboard of Sun City Girls LPs and even a couple of one-off wedding recordings!

But I guess the most prized possession is the box of 78s that belonged to my father - particularly his Billy Eckstine collection. No real monetary value but personally they mean more to me than most things.

Tell us about your love of music/movies and what they mean to you.

I think I’m much like the majority of people who love music for its ability to transport me back.

In 1975 I started writing up my own top 10 charts – very haphazardly I’ll admit - petering out in 1978. But I recently found them again, and can trace my teenage years and all the dumb things I did just by looking at the music I was listening to, and knowing when and where I first heard the records or borrowed or taped or stole them.

It’s funny the emotions that the music can bring back. Embarrassing too, when I look at some of the songs I was listening to. David Soul? Really?! But I can see the trajectory and the discoveries – Kiss and T.Rex and Sweet and then the beginnings of my leanings towards punk when I found the New Wave compilation – In a town and time when sports was the big thing I was (still are) a total geek loser and the music was my escape.

Now I crank it up, drink a beer and pretend I’m not past the half century mark. And now I have those charts as a guide I’m working on a memoir about what it was like then and how Countdown, 99c cassettes and Marc Bolan got me through the 70’s and puberty.

Give us your top 10 albums of all time:

I don’t know if I can actually pick a top ten anymore.

Albums have different meanings - some I play all the time, others are special because of the time or place they evoke. Miles Davis - Kind Of Blue is always at the top, regardless. Buried my father with his copy.

Then there are the albums that always seem to be there for me, or meant something at the time – Solaris Earth Pipeline – All That Glitters (ironically only ever available as CD-R or download when it was around) Feedtime – Shovel, Dead Boys – Young Loud & Snotty, Richard Hell – Blank Generation, Drunks With Guns – Self Titled, Springsteen’s Darkness On The Edge Of Town, Kiss – Alive, Sweet – Give Us A Wink, Billy Eckstine – Stormy, Louis Armstrong’s Hot 5&7 recordings... but to choose one T.Rex album? Impossible!!

And there’s still Radio Birdman and Bob Wills and everything that Chris D. (Flesheaters, Divine Horsemen) ever did.

How could I forget Stooges Funhouse album and Kid Creole and John Coltrane and Thin Lizzy and… and… ah forget it… I’m going to have to start again.

The best movie of all time though is The Warriors – no discussion entered into.

Give us some cool fact/trivia that we don’t already know:

Cool fact? During the infamous days at Factotum Books, Derryn Hinch hung up on me during an interview! (he didn’t like my answers to his questions...ha!)

How do you store your collection?

It may shock some but I have my records stored in crates and cupboards.

My man shed is literally half a carport! (Not helped by my ‘other’ shed recently falling apart.)

And despite years of collecting records, I still have a Frankenstein stereo made up from various units (speakers are at least 25 years old now!) with two (or is it three?) turntables sitting there to use.

I’m not what you would call an audiophile.

I really don’t have the musical skills nor the technical knowledge to fiddle about with tone arms and pre-amps and getting the ‘right’ sound perfectly pitched and balanced… hell I’m far from perfectly pitched or balanced myself.

The books were neat once but now there’s a growing pile! At least they are in the computer room though.

Along with the pile of DVDs, magazines, Phantom memorabilia, two more turntables… oh dear, I think I may have a problem here.

What are you coveting? What’s your holy grail? Do you own it yet?

There’s probably more than I care to admit, but I really want Gloria Jones Vixen LP – that’s top of the list right now. (She was Marc Bolan’s partner and muse, so I have to have it!)

There are other records on the list but none ridiculously rare - just things I need to have. To put them with the others I needed to have.

There’s an Armand Schaubroeck Steals LP I need, Dalvanius & The Fascinations – voodoo lady 12” (which I didn’t know existed until recently)...

Funny story – it took me 30 years to find Dalvanius’ two singles simply because I didn’t know his name at all, I’d seen the songs on Countdown back in the 70s but no one knew who I was talking about. Stumbled upon them at a market stall (I knew the song titles, not the artist) and they were everything I remembered, but then I went online only to discover he had passed away… and that there was a 12” single!!!I need that record.

Oh and then there’s the Cassius Clay LP from the 60s, and Joe Frazier singles (just for the boxing connection) and there’s always another T.Rex record or single or boxset.

I mean, I'd love to have rare bolan 45s, the early releases but I’m not paying a fortune for them so I’ll never have them – although I ended up with one that I recently picked up at a good price that it turns out is worth a bit! (But I would never pay that sort of price, it’s a bloody record not a life-saving vaccine.)

There are others too - for example, I really want the WhiteBoy 45s but I won’t pay high prices, I wanna play the damn things and get drunk and play em again so I won’t pay big bucks cos I’d be too scared to touch the bloody things. So I’ll just have to settle for the downloads for now.

The plural of vinyl is vinyl. Remember that kids – ha! But seriously, who cares? As long as another generation is discovering records, I’m not too concerned if they haven’t quite cracked the lingo yet.They keep me employed for a start.

Massive thanks to Kami for sharing his collection & stories with us.

Hey, we're searching for our next Cool Collector. You interested? Email us and let us know! If we feature you on our blog, you’ll get $50 to spend in our store!